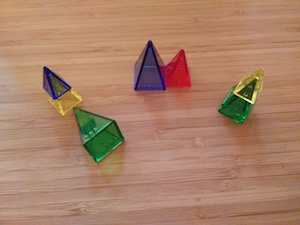 Zendo is an interesting game. The full rules are on the linked page, but here’s the short version:

Examples of rules are “contains a blue pyramid”, “contains two small pyramids”, “all medium pyramids are touching a green pyramid”, and even complicated monstrosities like “pyramids are large if they are green or yellow, and there are no blue mediums”.

However, ambiguity in rules can be a problem, especially when players are guessing rules. Here are some examples of ambiguity:

It isn’t too difficult to disambiguate rules, but unambiguous rules can get pretty wordy, and asking for disambiguation can give away information. What if there were a better way?

Lojban is a constructed language designed to be logical and avoid ambiguity. It turns out that it’s quite easy to express a large variety of Zendo rules unambiguously in Lojban, and the rules are sometimes more concise than their English equivalents! I also find that thinking about rules in Lojban helps me consider a different set of rules, because the rules that are easily expressed in Lojban are different from those easily expressed in English.

I’m going to briefly cover the parts of the language relevant to constructing Zendo rules. That means a lot of less relevant details are going to be omitted, and other parts will be left to be inferred from examples. If you want to pronounce the words right in your head, check out the phonology guide. For more Lojban resources, check out the end of this post.

The most important word for Zendo rules is da. It means “there is at least one thing you can substitute here such that the sentence is true”. Together with the word xunre, which means “x1 is red”1, we can write the simplest possible rule:

Notice the emphasis on “at least one”. The default quantity is su'o pa, “at least one”, but any number (or number-like word) can be stuck in front of da.

Take special note of the last two examples. Even though these are called “existential” variables, they can also express non-existence with no (zero), or universality with ro (all).

The words de and di are the same as da, but represent different variables. Multiple variables can be used together.

The meaning can change if variables are introduced in a different order. To do this, se farsni is used, which means “x1 is pointed at by x2” (se swaps the first and second places).

This matches how existential quantifiers work in math:

To avoid reordering words in the sentence itself, you can declare the quantifiers separately in the prenex, which is separated from the main sentence by the word zo'u3:

Lojban has several different logical connectives for different parts of speech. Here, we’ll use gi'e (and), gi'a (or), and gi'o (if and only if)4. You can stick na before or nai after to negate the corresponding operand.

Note that the last example could be expressed with a relative clause as well:

You can connect multiple phrases together using .i followed by je (and), ja (or), or jo (if and only if). Note that the final vowel is the same as before for each connective.

If there are two or more logical connectives, they are evaluated using left-associativity (left to right).

The word zmadu means “x1 is greater than x2 in property x3”. To create a property to fill the third spot, lo ka (which means “the property of”) is used along with a subphrase. The most common property in a comparison is lo ka barda (the property of bigness).

Another useful word that takes a property is traji, which means “x1 is the most x2”.

See if you can figure out the meaning of these rules! Mouse over or tap the black text for the answers.

For a broader introduction to Lojban, check out lojbo.org. For more detailed information about the language and learning resources, go to lojban.org. If you decide to try learning Lojban, I recommend reading la karda first.